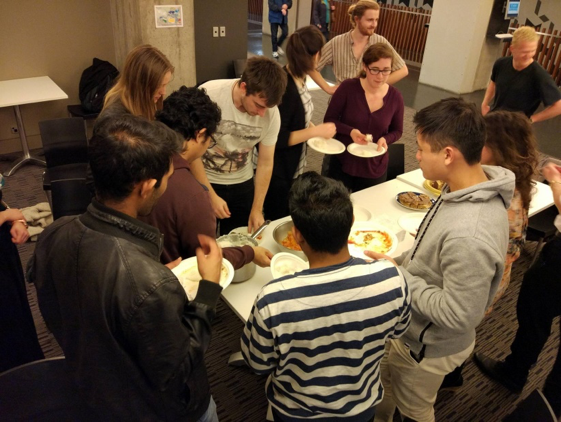 On a humble Thursday evening after four hours of lectures and tutorials, a group of 25 students from 4th and 5th year made their way to the University café so they could experience some exciting ethnic cuisine. Everyone was hungry and keen to learn and taste some new dishes. All the ingredients were ready and so were the cooks. The stage was set for what I believe was WMSA’s first MasterChef evening.

We had two cooking stations, one in the dining area manned by chef Iffah, Nisah, Mum and Izzan. The other was in the café’s kitchen where Phillipa was. The group split in half so not too many of us crowded around the chefs and also so we could give cooking a go. So in true medical student style, we had a lot of us gathering around a teacher showing us how to do something. And then we would have a go after watching it once.

There were three things on the menu for the evening, all from different parts of the world. Roti John, made by Iffah, Nisah, Mum and Izzan was a Brunei-Malay egg mince sandwich that proved to be a big hit. Iffah gave a brief history of the sandwich, telling us that when an English man named John once asked a street food vendor in Malaysia to make him a burger. Of course the vendor had no idea what a burger was back in the day so John described it to him and so Roti John was born. Mimicking the classic Julia Child and Jamie Oliver style of teaching, tables were set up so that teachers faced students as they were teaching. After the chefs made a couple of the delicious sandwiches, the others had a go each. It proved to be a big hit as everyone seemed to love it!

On the other station, Phillipa was teaching some keen beans to make Nshima, a staple from Zambia. It was mainly from maize meal, an ever present in Zambia because it is cheap, filling and easy to make Phillipa says. Here those who were learning huddled around the stove in a way you would as kids when your mum taught you how to make eggs. The Nshima required some strength as there was a lot of stirring involved, but when it was finished Phillipa made some tomato relish (which she called Ndiwo) to go with it too. Again, everyone also seemed to love it!

Finally, dessert was some delicious chocolate caramel slice made by Georgia – the great co-organiser of the event. It was a wonderful conclusion to quite the multicultural meal. We all thanked the awesome chefs who volunteered their time and effort as were finished the remaining food.

Georgia and I can comfortably say the event was a success. Everyone had their tummy filled nicely and seemed to enjoy the MasterChef concept without the mean chefs! If you missed out or want to see another one, there is a possibility of another event like this with a whole different but exciting menu!